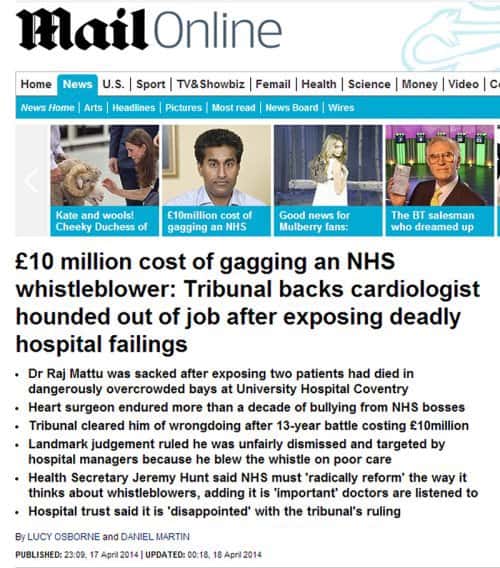 A cardiologist sacked after blowing the whistle on shocking NHS failures was cleared of any wrongdoing yesterday – after a 13-year battle thought to have cost the taxpayer £10million.

Dr Raj Mattu, a leading heart surgeon, endured more than a decade of extraordinary bullying by his NHS bosses.

He was sacked after he exposed the fact that two patients had died in dangerously overcrowded bays at his hospital.

Instead of listening to his concerns over the shocking standards of care on the wards, bosses first suspended, then sacked him and then spent millions of pounds of taxpayers’ money  pursuing him through an employment tribunal.

They also submitted more than 200 false allegations about him to the General Medical Council – all of which, he says, were rejected.

Dr Mattu wrote to the head of the NHS Sir David Nicholson – dubbed the Man with No Shame – about his treatment and the appalling care at the Walsgrave Hospital in Coventry, but received no reply.

Now, after the 13-year ‘David and Goliath’ battle, a tribunal yesterday found the surgeon had been unfairly dismissed.

And, in a landmark judgment, the tribunal ruled he had been targeted by hospital managers specifically because he blew the whistle.

Incredibly, it emerged his bosses spent thousands of pounds of public money hiring private investigators to look into the affairs of the heart specialist, and on employing a PR agency to deal with potentially damaging media fallout from the case.

Charlotte Leslie, a Tory member of the Commons health select committee, said: ‘The fact that an individual, who has done their best to raise their concerns about patient safety, should have cost the NHS this amount of money is absolutely sickening.

‘The NHS needs to radically reform the way it thinks of whistleblowing.’ Health Secretary Jeremy Hunt said: ‘This shows just how important it is that whistleblowers speaking out about poor care can be confident they will be listened to.’

After the judgement, Dr Mattu said: ‘I am relieved. My treatment by the trust over the past 13 years has damaged my health, my professional reputation and my livelihood.

‘The NHS needs to radically reform the way it thinks of whistleblowing. This shows just how important it is’

‘I can only hope that the NHS learns from my case and starts to listen to doctors and nurses.’

Dr Mattu first voiced concerns about the high death rate for heart bypass operations at Walsgrave Hospital in 1999, which at the time had far higher death rates than expected. He blamed at least two of the deaths on the cost-cutting practice of putting five patients into bays equipped for only four.

In one case Dr Mattu and two senior nursing colleagues lodged an official report after a 35-year-old patient died because staff could not reach him with vital lifesaving equipment in an overcrowded bay.

When the Trust failed to respond to his concerns, or those of the Commission for Health Improvement and the Department of Health, Dr Mattu decided to go public, and spoke to the BBC. This, he said, led to the start of a ‘witch-hunt’.

Five months after appearing on the BBC he was suspended not for clinical mistakes or for whistle-blowing, but for allegedly bullying a junior colleague – claims that were later disproven.