The surgeon who exposed the scandal of “health tourism” in the NHS spoke out after being investigated by the General Medical Council for refusing to give an ineligible health tourist free treatment. 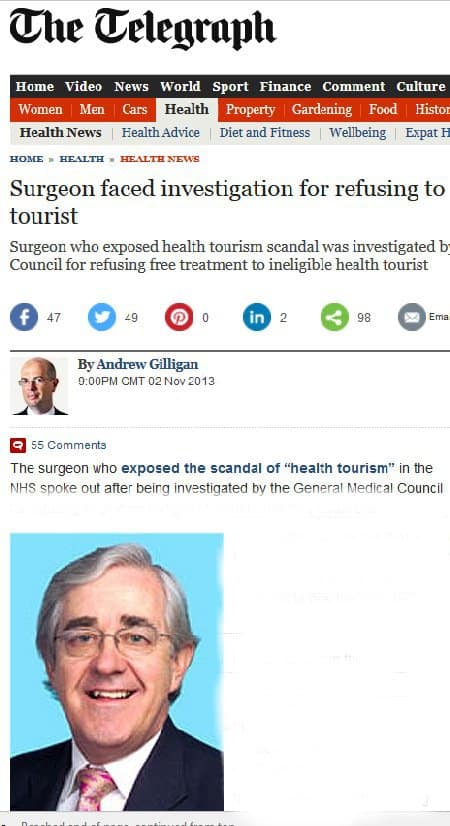 The regulator subjected Prof Joseph Meirion Thomas, who has 44 years’ experience in the health service, to a “fitness to practise investigation” after a complaint by the patient, a non-EU national who had never lived or worked in the UK.

Prof Meirion Thomas was cleared, but said that professional rules were one of many barriers to tackling the problem, claimed to cost the NHS up to £2  billion a year.

“If I recognise a patient as being ineligible, I am not allowed to declare that — because the minute that patient walks in to see me, I have a duty of confidentiality to that patient,” he said.

“I cannot even tell my overseas visitor officer [a hospital official with the job of recovering money from non-NHS patients] that I am suspicious the patient is there illegally. The loopholes are phenomenal.”

Prof Meirion Thomas, senior cancer surgeon at the Royal Marsden Hospital in London, said he believed that around 5 per cent of the patients he treated were health tourists who had come to Britain specifically for free treatment.

“One of the most awful things that happens to me is that I have to cancel surgery for a legitimate patient because of a health tourist who is ineligible for care,” he said. “That really, really bothers me.”

The hospitals concerned are Guy’s and St Thomas’s, which with many others in London has a high proportion of overseas patients. Other hospitals have noticed sharp rises in foreign patients demanding treatment.

Hospitals in Southend and South Essex saw a leap in such patients, many from Portugal, when easyJet started operating from the local airport.